We have changed our front window display, the Christmas theme had definitely worn out its welcome!  It is not always easy to assemble the window displays, or even come up with the idea for what we want it to be.  We like to have several new samples of projects and designs all prepared to display, along with the accompanying patterns.  At the moment, we don't have that ready to go with new projects, so we resorted to an idea that we have tossed around before.  We decided to show examples of our own early quilting and handwork items, and I gathered up several of my own oldies-but-goodies.  I tried to label and explain them so they sort of track my own story.  Some of the highlights:


On the left is a very large tote bag with wooden dowel handles.  I cut up that first unfinished quilt top to make it!  That bag with the pink and brown is actually an entire dresden plate block, quilted and folded in half with a zipper across the top.  A little plaid project bag with the most difficult zipper insertion that I have ever done!  And a simple little sewing notions bag.


Several more examples of tote bags--a Sue Spargo bag on the left with wool applique, I participated in a small group challenge so we could all trade tapestry and wool scraps;  a Halloween bag with embroidery; a few little hexagons appliqued on osnaburg cloth; and a bag with grommets at the top.


The blue and white items at the top of the picture are special to me because they represent the time I spent in Sweden (1971-72) and learned weaving.   The little pillow on the bottom left is a perfect example of my 1980's counted cross stitch--teddy bear, hearts, rust and green with ruffles!  The white pillow also has lovely eyelet ruffles, and was a hand quilting assignment for my first quilting class taken at the Cotton Shop in Richfield.  Top right is one of my very first mostly successful projects, a Thimbleberries tablerunner with the backing folded around to the front for binding--a technique I have never used again!

Which pretty much brings us to the 21st century, and my own line of patterns!  The ones pictured above are Chill Pill, Star Light and One Row To Go.  Emmaline Design is my business name for pattern designs and longarm quilting.  It is a lot of fun for me to learn the ropes of having my own business.  Since I am often asked the question "Who is Emmaline", I will tell you that it was the middle name of one of my grandmothers.  I wanted to choose a business name that did not pertain entirely to quilts, so this gives me the freedom to change focus if I choose.  See, there's a lot to think about with just picking a name!  Now try to name a few patterns, and you will get caught up in my conundrum of lists of names!
I hope you enjoy this little peek into my background, and I am hoping we can do the same with our store owners in the future!
Posted by the Patch People at 10:25 AM No comments:

If you have frequented the shop in the past few weeks, you have probably noticed that we have had a table makeover in our main class area.  We have brought in a new style of work table that is working out great in our space.  We have several requirements for our tables --


We are putting our tables through a workout with our daily usage, and can vouch for their usefulness.  In fact, we can set you up with your own!  The photo above shows 2 of the individual size tables placed end-to-end at the height for cutting.  We also have 4 of the larger size tables arranged for our sewists to be seated at.  They are reasonably priced at $149.99 (small size) and $199.99 (large).

Jeff has been very good to work with, and there is a bonus that the tables are locally made because he delivers them right to our door and our customers don't have to pay for shipping.  After all, they need to stop at the store for a little bit of fabric, anyway!  Please check out the tables in the store and see what you think.  Jeff also has good information on his website, including videos that demonstrate assembly and use of the table.

Yesterday I had the honor and privilege to lead a group of 11 aspiring machine quilters into the next level of skill for them. They were very good sports, considering that I was the pinch hitter for Laurel. She has taught this class for many sessions, but had to leave unexpectedly and needed a substitute. Which lead me to Saturday with this great group of aspiring quilters! 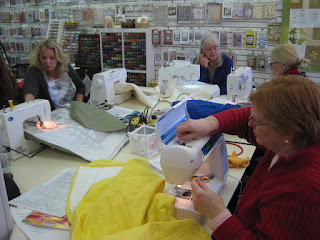 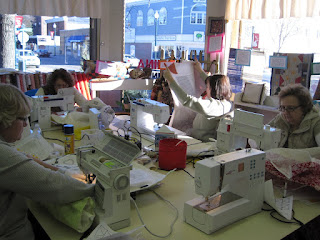 Posted by the Patch People at 6:25 PM No comments:

Today I have a nice little idea for you that is so simple yet so great. This is all about the humble pressing cloth. I have come to realize that using a pressing cloth can make a big difference in the success of some of my projects. It is especially useful for applying iron-on interfacings or stabilizers or batting, so I can get enough heat to create the fused bond but not melt anything to the bottom of my iron! I generally have used a chunk of muslin, since that is usually plentiful and cheap and works.
Not very long ago, Debbie told me that she was ordering a bolt of white organdy fabric because it makes the perfect pressing cloth. I experienced a moment of thinking "What will she think of next??" and maybe even "What makes her pressing cloth so special?". But she is the boss, so if she wants a bolt of organdy then she can have a bolt of organdy! Who knows, maybe we will start making bridal couture!
So the bolt of organdy arrived, and I was leaving for a retreat, so I decided I wanted to try out this organdy press cloth idea with some others. You know, put it to the test. See if it's really worth chucking out the muslin I've been using (which is brown enough to earn a replacement anyway). I thought it was kind of stiff, and Debbie told me to just serge off the raw edges and run it through the wash once. Which I didn't totally do (the serging part was skipped) but I did pack it up for my trip. Well, it was a hit! We used that pressing cloth in a variety of ways and found that it is, indeed, superior to the muslin we were used to. Who knew!? It's thin enough that you can see what it underneath it and do a more accurate job of placement and pressing. And it just seems - well, sort of like a little luxury on the ironing board! We do get pleasure in the little things, don't we? 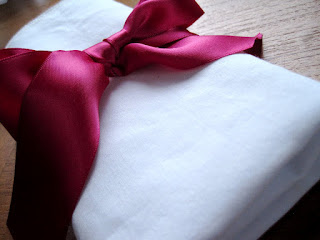 So, to make this long story short, get thee down to Bear Patch and try out some organdy press cloths! Because we do have a whole bolt of it! It is only $6.99/yard, so it is a sweet little idea that is inexpensive, useful and thoughtful for the other people you know who use an ironing board more than twice a year!
Posted by the Patch People at 9:12 AM No comments: